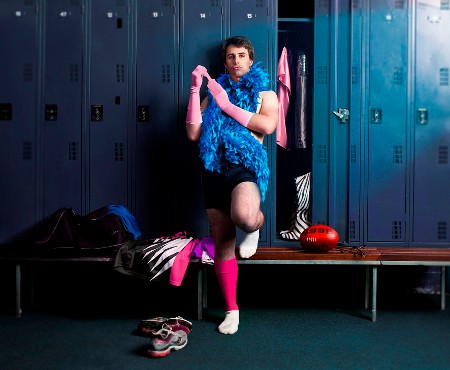 The golden glow of the lights in the foyer of the State Theatre Centre of WA in Perth beckoned last night as my better half and I looked forward to attending the performance of Managing Carmen co-produced by Black Swan Theatre Company and the Queensland Theatre Company.

We seated ourselves comfortably before the show, and enjoyed the ambiance and beautiful wooden interior of the Heath Ledger Theatre as we watched the audience arrive at a steady pace before show time. The iconic symbol of Black Swan Theatre Company shone proudly on each side of the stage. Look carefully, and you’ll see not just the image of the black swan but also the face of an actor. This was pointed out to me by my partner, hence his designation of better half for the night.

Managing Carmen tells the story of super star AFL player Brent Lyall, who has a secret in the closet that could blow his stardom sky high. Though not if his brash sports manager Rowan can help it, since lucrative contracts worth millions of dollars are at stake.

From start to finish, the show shone with the strong performances of John Batchelor, Timothy Dashwood, Claire Lovering, Anna McGahan and Greg McNeill. The play was hilarious - an absolute hoot,  and the audience lapped up every minute of it. Timothy Dashwood played the part of Brent superbly and his performances as Carmen were just perfect!

Managing Carmen captured the hearts of the audience, from young to old. It is a slick and snappy production, hilarious and funny beyond belief.  The sound tracks and lighting effects were artistically choreographed to suit each scene of the play, from soft, fluffy clouds in a beautiful blue sky, to the pulsating beats of a nightclub.

During interval time, you can grab a drink to mingle with friends or catch up with lost acquaintances, or enjoy the cool breeze of a Perth summer night standing on the balcony looking out at the Perth skyline.  However, the cliffhanger finish to the first half of the play had us all hurrying back into our seats early to find out what happened next.

Lots did happen to poor old Brent our football superstar during the play, and his money minded sports manager sure got more than he bargained for. Playright David Williamson also throws Brent's fashion aficionado girlfriend, a sleazy sports writer, and an attractive acting coach into the mix, and allows us to sit back and watch the chaos unfold!

The performance of Managing Carmen was superb - the performers and producers have really brought David Williamson’s crackling dialogue and intriguing scenario to life with polished and vivid performances that elicit laughs (and cheers) from the audience, even as they deftly skewer the cynicism of the media and the big money sports management scene.

Beyond having a good laugh, Williamson raises some thought provoking issues about the modern society that we live in today - peer pressure, prejudice, and non conformity. The message that comes through loud and clear is that as individuals we all need to be respected, even though at times our so called differences or unusual behaviour may seem to fall outside society's norms.

The smiles on the faces of my fellow patrons, and animated discussions about our favourite scenes told the whole story as we made our way out into the night. A wonderful two hours of entertainment.

Managing Carmen shows till 2 December. If you are looking for a top night of theatre at the elegant State Theatre Centre of WA in Northbridge, you’d better hurry on down to William Street as fast as you can.


For more Related Articles, please scroll to the bottom of this page.