Bitten by the Rottnest Island Bug

"Turn around really slowly and carefully," my biking partner says as I stoop to put down my helmet. "And look at what's behind you."

As an Irishwoman in Australia, it's got to be the phrase I least wanted to hear. There are others, including “is that a log or a crocodile" and “I’ll just put on my budgie smugglers” but in terms of I'm-in-the-place-with-the-most-poisonous-animals-in-the-world-and-they-all-hate-me, this one's got to win. That's it.  My number is up.

And I haven't even seen a quokka yet.

I’m blaming the travel tips I have got from every Perthite and tourist who has ever been to WA. As one, they all said I needed to see Rottnest Island. Nicknamed Rotto, the island is just an hour from Fremantle; a stunning environmental refuge with white sand beaches, no cars and the infamous Rottnest quokka. And, because there’re no motor vehicles allowed on the island, it’s pedalling all the way.

We hire bikes to get around the twenty-four kilometre circuit of the island. It was a decade since I was on one but I am sure it will come back to me like – well, like riding a bike. We pick them up at the jetty. I remember bikes, although this one looks like a re-welded coat hanger.

Brakes. I remember BRAKES. This bike, it appears, doesn’t like them. I discover this after I decide to go for a brisk pedal on the pier. Whizzing along about a foot off the ground on a bike apparently designed for a midget with vertigo, knees whizzing past my elbows with the chain making a crunching sound, I have to steer into some fishing nets to stop.

One bike swap later, we are on our way. Rotto is stunningly gorgeous but not urban. The sun beams down on narrow roads, unused to heavier traffic than people on bikes. The island is known for its beaches and beauty, and there are signs everywhere about the unique flora and fauna. 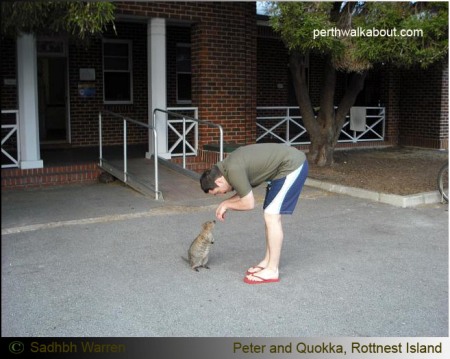 I want to see the animal synonymous with the island, the quokka. Quokkas look like they were designed by a Creator who was worried that koalas and wallabies weren’t cute enough. “Let’s make ‘em tiny. Really small, with fat furry cuddly bodies and little paws that they use to gesture cutely.” Under a foot tall and blessed with tufted ears and cute snuffly little noses, the resident marsupials of the island are meant to be so tame that they’ll graze around your ankles.

But I need to concentrate on the road. Cycling after a ten year absence turns out to be fun. My balance comes back, and I stop being a danger to stationary objects. One hour later, I am a confident cyclist again.

Two hours later, I am in agony. Ouch, my bum. Standing aches, sitting hurts and I’d rather sit on a cactus than on that saddle again. We stop to rest and that’s when it happens. I’m going to die by spider bite or snake venom or platypus poisoning and I haven't seen a quokka yet. I mean, how much does this suck?

Incidentally, if you do get bitten, sucking is pointless. What you should actually do is bind the whole limb as tightly as you can, starting at the bite point, and stay calm as you are whisked to hospital with your Aussie friends cheerfully reminding you that “you didn’t want to get bitten by one of those, mate, they’re really poisonous”.

Of course, Rotto being a rural paradise where conservation is the word of the day, there’s no hospital. There’s a twenty four hour ranger service to help the animals, bless their poisonous little faces, should they break their huge venomous fangs. Humans, however, are on their own. The nearest hospital is in Fremantle, twenty kilometres away by sea. And now I have a snake or possibly spider ready to bite my poor unfortunate bum, adding unsightly swelling, puncture marks and death to the various other complaints I currently have about it.

Bugger. This time I actually am going to die. I start to turn while stepping back really slowly and carefully, aware that no matter what I do, my bulk moving about is probably going to frighten the animal into thinking I’m attacking.

And I haven’t even seen a … 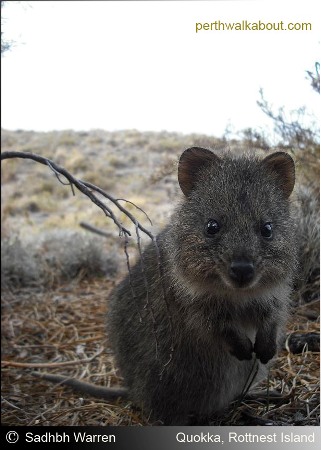