The suburb of Cottesloe is a wealthy one in the western suburbs of Perth, bordered by the Indian Ocean coast on one side and a main road, Stirling Highway, on the other. But the particularly nice thing about Cottesloe is although it's home to many of the wealthier inhabitants of Perth, it's still a place where all locals and visitors alike can go for a casual and relaxed day out.

By far the most famous part of Cottesloe is Cottesloe Beach. One of Perth's most well-visited beaches, Cottesloe Beach is one of the few spots in the city where buildings actually encroach upon the beach - Perth people tend to like their beaches unspoilt - but at Cottesloe, it's very tastefully done.

The local surf lifesaving club runs regular patrols making Cottesloe one of the safer places to swim - just make sure to swim between the flags where the life guards have deemed it safest to swim. If you've had enough swimming then there are plenty of other beachside activities including beach volleyball and beach cricket, plus there are barbecues to use under the Norfolk Pine trees just above the beach. 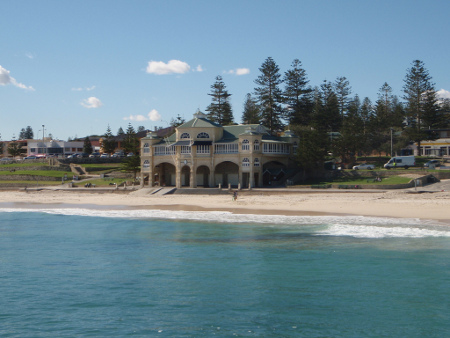 On or close to Cottesloe Beach there are numerous cafes for meals, snacks or coffees, with the most famous being the Indiana, located in the old colonial-style building directly on the water. The Indiana offers a great buffet breakfast on the weekends and is open all week for lunch and dinner - not only is the location pretty much perfect, but the food quality actually matches it most of the time. If you're talking to locals - like me - they'll probably still refer to it as the Indiana Tea House, but apparently since their 2009 renovations they've changed their name to simply Indiana. Good to know!

One of my favourite Cottesloe cafes is actually not on the beach with the rest, but a short walk up John Street - to the suitably named John Street Cafe. Set right in the middle of suburbia, it's very popular with locals and that's why I actually recommend it for travellers, because that means Perth visitors can soak up a bit more of the local atmosphere. And they do great cakes!

Pubs also abound along the Marine Parade strip, which is the road running along the top of Cottesloe Beach. Heading down to a Cottesloe pub is especially popular on a Sunday afternoon for what is known as the Sunday session - a term derived from the liquor laws when they first allowed pubs to open and sell alcohol for a short time on Sundays. Try either the Cottesloe Beach Hotel or the Ocean Beach Hotel (the "OB"), or perhaps even both! 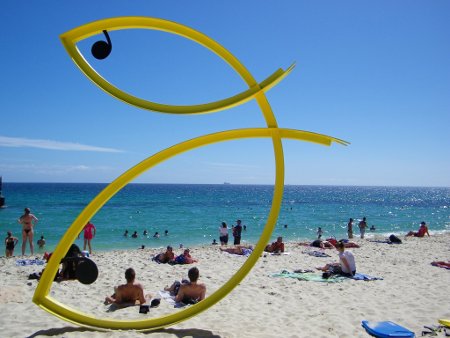 
Cottesloe Beach itself is also the location for several special events throughout the year. During most of March, the Sculpture by the Sea exhibition takes place, when the beach becomes a sculpture park - these days more than 50 different (often quite large!) sculptures by local and international artists are featured there, transforming a beach hangout into an art gallery. The sculptures range from traditional to very modern in style and it's always worth a visit.

In February, the Rottnest Channel Swim leaves from Cottesloe Beach. This swim is (I think!) for slightly crazy people who want to swim all the way from Perth to Rottnest Island, a distance of almost 20 kilometres across the Indian Ocean (and yes, sometimes they see sharks) - just the same, it's a popular event to watch and I'm in awe of the swimmers who complete it.


How to get to Cottesloe

Cottesloe is easy to reach by train. Just take the Fremantle line which runs, logically enough,  between Perth and Fremantle and the Cottesloe station is pretty much in the middle of it. From the station, it's a short walk down to the beach. Follow the teenagers with their boogie boards! During summer there is sometimes a shuttle bus from the train to the beach so if it's too hot to walk, look out for it.