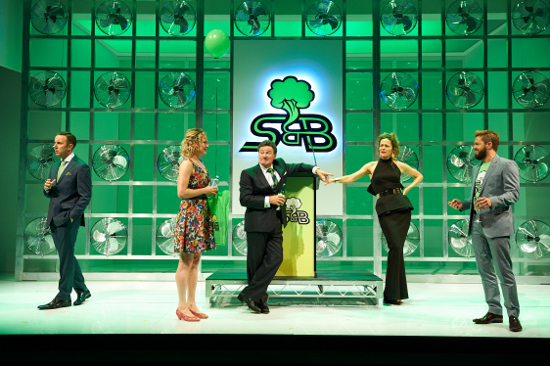 Gasp! By Ben Elton first debuted way back in 1990 in London under the stage name Gasping, and was set in corporate Britain. 25 years later, the team of Black Swan State Theatre Company, Queensland Theatre Company and Elton have dug it up from the depths, transplanted it to Australia's mining industry, given it a bit of a modern spit and polish and set it loose on unsuspecting theatregoers.

Having gotten a re-airing after such a long interval, you could be forgiven for thinking that Gasp! might not be quite relevant to modern times. But Elton clearly shows that when it comes to human nature, and humans vs nature, nothing much has changed.

When mining giant LockHeart Resources boss Chifley Lockheart informs his staff that Australia has nothing left to mine, and that new resources are needed to stop the company going broke, underling Phillip comes up with an idea that gives the breath of life to the ailing corporate giant – selling designer air to the masses.

What seems at first a boon to asthmatics and allergy sufferers worldwide soon becomes an all too believable spiral into corporate greed, rationalisation and profiting from human suffering. Each little step on the descent to depravity seems so logical and inevitable, knowing what we know about ourselves and humanity's track record in exploiting our planet.

And while that might seem a pretty dark premise on which to base a satirical comedy, fortunately Elton and the cast bring a whole lot of funny to the production. Gasp! starts off at a cracking pace and never lets up, with Elton's trademark dialogue style flowing freely throughout the two hours of comedy. Even while the audience were shaking our heads in cynical despair at the events occurring in front of us, we were also shaking with laughter at Elton's crisp witticisms and the cast's terrific comic performances.

Speaking of the performers, all five members worked together on stage beautifully. I'd be hard pressed to find a personal favourite, although I think I'd have to give the nod to Damon Lockwood as Phillip, if only in recognition of some playful improvisational skills he displayed when a couple of small technical hitches paused the preview night at different times.

A final mention of the set – it's so modern looking it's almost retro – in any case it looks stunning and it gels perfectly with the performers. Black Swan always seems to hit the mark when it comes to set design.

Gasp! is two hours of fast, frantic and funny entertainment that makes you laugh uncontrollably whilst sneaking a sucker punch of social commentary to your solar plexus – you'll finish the night short of breath either way.


Greg Letts is a ppc marketer, ping pong player, guide dog puppy raiser by day, and an entertainment reviewer by night. To get the insider's perspective on upcoming events at Perth, follow us @PerthWalkabout