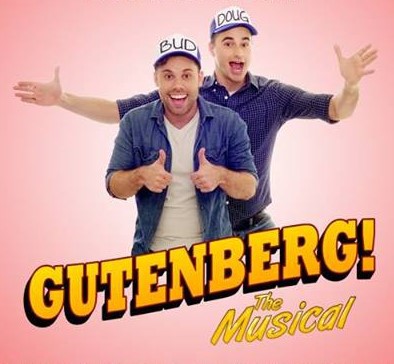 Holland St Productions in arrangement with Origin Theatre, present the West Australian premiere of Off- Broadway hit Gutenberg! The Musical!

The independent production company based in Perth is a Fringe World favourite, with all three of their previous musicals - Falling to the Top, Point and Shoot, and Dr Felicity Rickshaw’s Celebrity Sex Party winning in the Theatre Award category.

Gutenberg! The Musical! the hilariously, knee slappingly funny, musical-spoof about the dream of Bud and Doug and their next (cross your fingers) smash Broadway musical makes its way to Perth!

Bud and Doug, a pair of aspiring playwrights, perform a backers' audition for their new project - a big, splashy musical about Johann Gutenberg, the inventor of the printing press!

With relentless enthusiasm and misguided optimism, they sing all the songs and play all the parts in this crass historical epic, hoping one of the producers in attendance will give them a shot at Broadway stardom.

The musical stars the multi talented duo of Andrew Baker and Tyler Jacob Jones, along with Joshua James Web as Musical Director and Erin Hutchinson as Director. All are graduates of the WA Academy of Performing Arts (WAAPA).

Come along for a night of madcap entertainment!

Info and Tickets: Tickets $30 at www.hollandstproductions.com