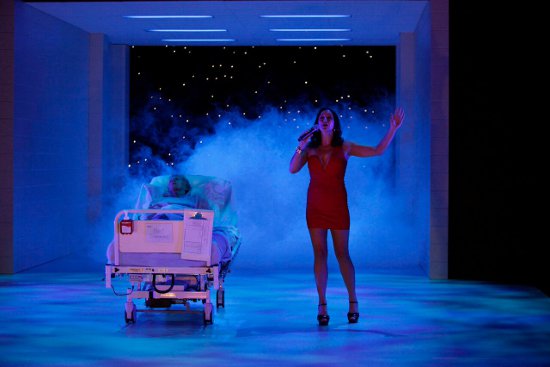 "Everything comes to him who waits" - so goes the popular cliche, and in Michael Gow's Once in Royal David's City the theme of waiting is examined from many different perspectives.

We are introduced to the concept right from the start, with the arrival of the audience to be greeted by a sparsely laid out stage, which more closely resembles the backstage area of a play, where actors wait for the show to begin.

Then, as actors drift on stage and languidly warm up, we the audience are left in suspense as to what is going on. Has the play started yet? Is this just an extended prep session prior to things starting? As the actors finally take their places and everything seems ready to go, we are once again forced to sit and wait while the musical accompaniment stubbornly refuses to gracefully fade out, bringing a sense of anticipation and unease as time stretches out.

The bare bones synopsis of Once in Royal David's City involves theatre director Will Drummond coping with the recent loss of his father after a long illness, and preparing to pick up his mother from the airport for some family time together. But when she is suddenly discovered to be seriously ill, he is left to question life, love and our place in the universe while waiting for the next hammer blow to fall.

Are we merely killing time waiting for something to happen? Or is the time spent waiting for events to take place where life really occurs?

These and other questions are posed as Will struggles to deal with the circumstances involving his mother's illness. Utterly absorbing, in parts very difficult to watch, but always totally authentic, Black Swan State Theatre Company's production of Once in Royal David's City is entertaining without being entertainment, and very close to the bone.

Once in Royal David's City is on until the 9 April.