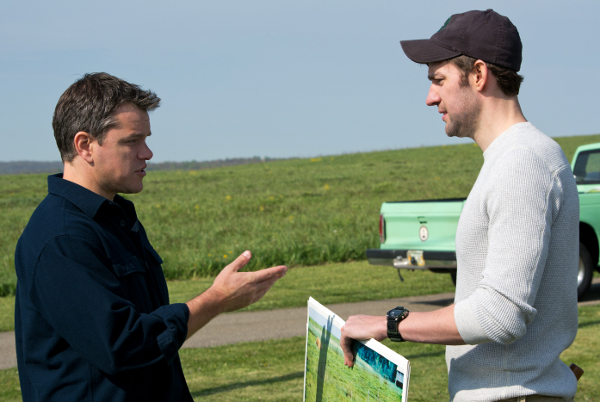 In Promised Land, which is now showing at Luna Leederville, actor and writer Matt Damon and director Gus Van Sant team up once again, along with screenplay co-writer John Krasinski, to bring us a modern American folk story that delves into the nature of people and trust, through the lens of a corporate vs rural America encounter.

Matt Damon stars as Steve Butler, a corporate salesman for Global Crosspower Solutions, who is sent to the small rural town of McKinley with partner Sue Thomason (Frances McDormand) for a routine three day sales drive to purchase natural gas drilling rights on the town folk's properties.  Steve soon finds unexpected complications arising in the form of Frank Yates, a retired scientific expert turned schoolteacher, and in the arrival of environmentalist Dustin Noble (screenplay co-writer John Krasinski), who begins a serious game of oneupmanship with Steve to win the hearts and votes of the townsfolk, and most notably local schoolteacher Alice (Rosemarie DeWitt).

Steve is on the verge of making the transition from in the field salesman to New York executive, and just needs this final transaction to go smoothly to cement his promotion.  Unfortunately for Steve things don't go according to plan, and he must battle against constant roadblocks in his path, as many of the townsfolk, the mayor, Dustin, his car, and even the weather conspire against him.

As the story unfolds, Steve, Sue and the town must all deal with issues of trust. Steve trusts his company implicitly, and uses his natural charm and small town background to generate the same degree of trust from many of the townsfolk. Once he arrives on the scene, Dustin manages to quickly put cracks into that trust, and uses his own passionate and charming personality to quickly win a support base of his own. Watching Steve and Sue battle against Dustin for the backing of the town, and their little incidents along the way, provide a number of the funniest and most dramatic moments of the film.

In the end, it is the breakdown of trust that leads to the climactic final scenes. I'll avoid giving out any spoilers, but Promised Land eloquently makes the point that if you blindly put your faith in other people, you leave yourself vulnerable to being manipulated according to their hidden agenda. In a world where decisions are not simple or between right and wrong, and can have huge long-term consequences, it is up to everybody to do their own research, and think long and hard while making up their own mind about issues that affect them.

Promised Land is not your typical Hollywood action film, but instead is a thoughtful character driven piece where the main characters may be drawn in broad strokes, but are far from one-dimensional. 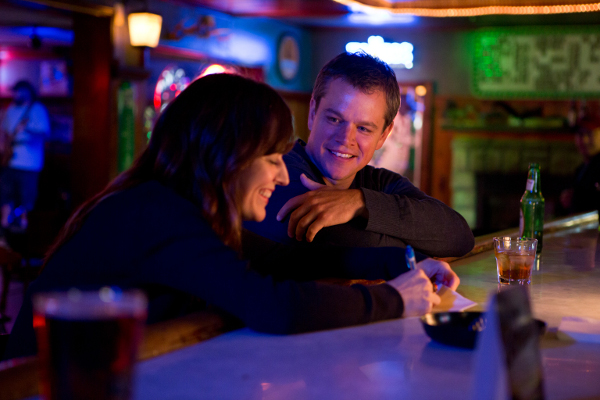 Steve is your typical corporate salesman, going through the motions of his slick sales spiel to buy up drilling rights throughout the town. He's not above fudging the truth a little about environmental concerns, or offering bribes to the town mayor and environmentalist Dustin Noble. But as he repeats throughout the film in an attempt to convince himself and love interest Alice, he's not a bad guy. Just a normal small town boy made good in the world of corporate America, where lying and bribery are seen as part of the normal cost of doing business.

As Steve's foil throughout the movie, Dustin Noble is played with great charisma by John Krasinski. A one man band fighting for a cause he believes passionately in, he makes the most of the meagre resources at his disposal as he battles Steve and the might of Global. The scenes where Steven and Dustin interact are both entertaining and oh so believable as ego and beliefs collide.

Besides being a highly entertaining story, I also especially liked the way that the film avoids painting everything in black and white. The town of McKinley is obviously struggling to survive, and desperately needs a windfall like the sale of drilling rights. But Van Sant leaves the question unanswered as to whether the decision to drill is the correct one. There are environmental concerns to weigh up against the economic factors, but neither is advocated as the best choice, and the people on both sides of the debate are presented as ordinary people with their own reasons, not as heroes or villains.

On the surface, Promised Land is a simple story of city slickers meeting country folk.  Or you could consider it a cautionary tale about industrial America vs the environment. But to me, at its core Promised Land is a piercing look at the nature of us all - our motives aren't always totally pure, and our actions and attempts to manipulate other people to get our own way reflect that. On the other hand, we aren't all bad either, and there still exists the ability to bond with other people to form a community. Finally, we also need to take responsibility for researching and evaluating our own decisions, or else somebody else will gladly make them for us, based on their own agenda.

Promised Land is just a terrific film on many levels - I definitely recommend going to see it.