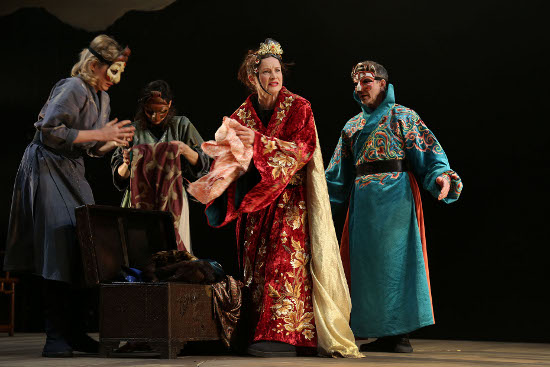 Walking into the State Theatre Centre of WA's main hall to take our seats to watch The Caucasian Chalk Circle, we were greeted front and centre stage by a number of masks in the Beijing Opera tradition, and a set with the expected historic Chinese overtones.

Stifling an inward groan, I settled into my seat fearing a 3 hour snooze fest, but the first inkling that I had jumped to the wrong conclusion was when I noticed a cast member serenely performing his warmup on stage behind the masks. As the minutes to the opening curtain ticked away, more members of the play joined him on stage, warming up their bodies and vocal cords in preparation for the night's performance.

And what a performance it was! Right from the opening kick-off it was clear that the collaboration between Black Swan State Theatre Company and the National Theatre of China was going to produce something quite out of the ordinary. Utilising the lavish costumes and stylised masks of Beijing Opera, along with a magnificent set design (the mountainous backdrop is a masterpiece!), and musical accompaniment that hits the mark, The Caucasian Chalk Circle brings to life an old Chinese fable that was adapted by a German and now interpreted by a Chinese/Australian team of designers and actors.

I was a little worried when the first song began, having sat through productions in other venues where the music was so loud that it was almost impossible to make out the lyrics, but thankfully everything was perfectly in tune, with the score enhancing rather than overpowering the singers. The addition of subtitles in English and Chinese up high on the backdrop was also a thoughtful touch for those of us who can be a bit hard of hearing.

With all the supporting pieces in place, it was then up to the cast to perform their magic. One of the wonderful things about coming to a Black Swan State Theatre Company production is that you know the cast will be on point every time, and this night was no exception. With each actor juggling multiple roles, masks and costumes in double quick time, every ball was smoothly kept up in the air for the whole 3 hours. A special shout out must go to Geoff Kelso's Azdak, who was the highlight of the night for me, and whose theme song is still bouncing around in my head at this moment – any chance of a soundtrack being made available?

The Caucasian Chalk Circle is a night of fun and frolic, with a few old style homilies about motherhood, family and unsettled times included for good measure. I left the theatre with a smile on my face and a song in my heart – cliched but true! Playwright Bertolt Brecht apparently liked to reveal the magic of the theatre, and in this case, while you may be able to see how the trick has been done, it doesn't make it any less impressive or enjoyable.  A great night out.

The Caucasian Chalk Circle is on until the 14 August 2016.