The Numbat: An Unknown West Australian

If you ask someone in Western Australia to name an endangered species, they’re usually pretty quick to respond with something exotic like a tiger or panda. Sometimes you might be lucky to get an Australian animal. A Tasmanian Devil for instance. Or a Koala. But what if you ask them about something closer to home? How about the Numbat?

In my experience, this has usually been met with blank stares. A Num-what? It’s not so surprising when you think about. The fate of cute and not-so-cuddly exotic animals is a much easier problem for us to deal with (mentally speaking) than looking in our own backyard and wondering where things went horribly wrong.

The Numbat is a medium sized marsupial that many people confuse with a meerkat or a squirrel (neither of which are native to Australia). It has a pointy nose, runs on four legs, has black and white stripes on its back and has a bushy tale. The Numbat is a specialised feeder which means it only one eats thing and in the Numbat’s case it’s termites. About 20,000 of them. Every day. 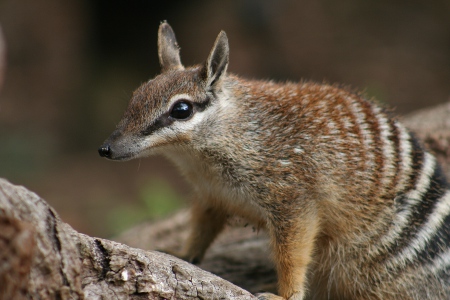 
What else can I tell you about them? Well, unlike most of Australia’s wildlife, the Numbat is active only during the day, making it one of only two Australian marsupials who are. This is because its food source, ie termites, are running around during the day as well. When night comes, termites and Numbats crawl into their burrows and sleep.

Anything else? They’re Western Australia’s mammal emblem. Did you know that? Sure, you’ve heard of the Black Swan and the Kangaroo Paw, maybe even the Gogo Fish. But the Numbat has been WA’s emblem since the 1970s and still it’s little talked about.

And soon they may only be talked about in the past tense.

The Numbat was once found across southern Australia, from New South Wales and Victoria, through South Australia and into Western Australia. With the arrival of the fox, the cat and agriculture, the Numbat was wiped out from its former range and reduced to a few small pockets of habitat in the south-west of WA. The two natural populations that remain are now in Dryandra Woodland, two hours south of Perth, and in Perup Nature Reserve, near Manjimup.

Today a recovery plan is in place that involves the WA Department of Environment and Conservation, Perth Zoo, Australian Wildlife Conservancy, Arid Recovery and Project Numbat. All are tasked with saving the Numbat from extinction.

Feral predator eradication, a breed for release program, protection of Numbats and their habitat and their reintroduction into suitable habitat are important and necessary activities needed to see the Numbat survive the next decade. While you might not be able to directly assist in their recovery, there are a number of things you can do to help.

If you own a cat, make sure it’s kept inside. Cats are efficient predators, even one that is domesticated. And even though you might not live near Numbat habitat, keeping your cat indoors helps protect lizards, birds and other native wildlife that still live in metropolitan areas.

If you go camping in the bush, be sure to leave hollow logs and timber where they are instead of using them for firewood. Numbats and other wildlife live in tree hollows so if they’re cleared there are fewer homes for them to breed, raise a family or use to hide from predators. 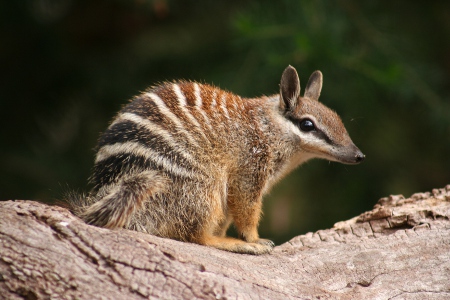 You can also help by becoming a member of Project Numbat, making a donation or purchasing merchandise. As a community not-for-profit organisation, Project Numbat’s role is to raise awareness of this little marsupial and fundraise for projects that help its survival.

Over the past five years we’ve developed a primary school education program free for teachers and parents to download from our website, attended numerous environmental and community events, and raised funds for research, surveying and radio-collars for released Numbats.

We’re always looking for ways to expand our reach and we’re currently working on an education program for secondary school students as well as purchasing wildlife monitoring equipment and signage about the Numbat for Dryandra Woodland.

Our goal is to make sure the Numbat doesn’t disappear and the best way for us to achieve this is to let as many people know about it as possible and make a meaningful contribution to their conservation.

And perhaps, sometimes soon, when we ask people if they’ve heard of a Numbat, they’ll reply with a resounding ‘YES’.