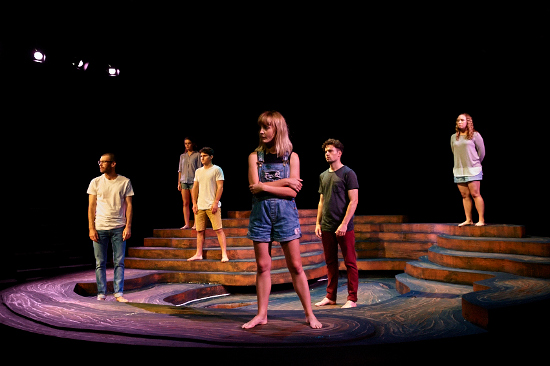 Black Swan State Theatre Company kicked off its season of plays for 2014 with the premier of Flood. The play is also being performed as part of the World Fringe Festival.

Flood was written by Chris Isaacs and is directed by Adam Mitchell, who also brought us The Mother Fucker with the Hat at the same time last year. The play is an initiative of the Black Swan Lab.

The mood of the play is light hearted to begin with – a group of 6 twenty-something close friends heading up north from Perth to have a much anticipated camping holiday over the Christmas season. The atmosphere is relaxed and carefree and as friends do, there is lots of laughter, joking and teasing back and forth.

As is the case when close friends who know each other well get together, you can enjoy yourselves without a lot of pretence and be able to drop your guard. Then a tragic accident occurs unexpectedly which stops the group in the middle of their tracks.

From a play that starts off lightly enough, the play goer is drenched with tension as they are swept into the world of the group of youths as the story unfolds with complex issues and dire consequences.

When the worst has occurred and you have to made a decision that will determine the fate of you and your friend – do you go against your moral judgement?

What happens when a group have to make a decision together? The effect of group think can swallow up the voice of the individual. Is the need to assert one’s individual rights and moral values more important than going with what the majority thinks they should do? What happens when as an individual you are the lone voice?

What’s more important? Protecting a good friend or doing the right thing by the law?

Would the fate / outcome have been different if the incident had involved members of a different race?

Black versus white, us versus them, racial tolerance, racial prejudice, a lack of understanding of other’s cultures, and how to behave in the company of others whose culture you’re not familiar with. The group struggles with finding the correct term to use as they argue about what to do on this fateful occasion. One of the girls pipes up with “Indigenous” –is that politically correct she says?

In the heat of the moment, the group threatens to split apart as they debate the consequences of owning up to the authorities about the tragic events. Visions of a media frenzy are so catastrophic that it seems out of the question to own up to the truth.

Flood is no light hearted play. It’s intense, it’s drama at its best at the story unfolds, and the layers of what makes up a person are unpeeled to show character strength, resilience, weakness and vulnerability at times, and one’s moral values and convictions when faced with a serious decision. The drama notches up even further towards the end, but you’ll have to go along and find out for yourself how everything plays out.

Kick off the year with a flying start and do yourself a favour by going to watch Flood at the Studio Underground at the State Theatre Centre of WA. The play will leave an indelible imprint in your mind long after you have watched it.

Nita Teoh pens her passion for Perth at Perth Walkabout. For more insider tips on Perth and surrounds, follow us @PerthWalkabout