Regardless of where you live in Perth, you’ll be sure to find some nice recreational spots to enjoy nearby. The suburb of Bayswater, approximately 8 kms north east from the Perth CBD, has many recreational spots and parks catering for those who like the great outdoors. Within this suburb, you’ll find many reserves including the Eric Singleton Bird Park, the Bayswater Riverside Gardens, and the Baigup Wetlands.

Here is a handy summary of some of the best Bayswater recreational parks to check out:

If you enjoy bird watching, head to the Eric Singleton Bird Park. To visit this suburban oasis of bird life,  hop on to Guildford Rd, turn into King William Street and you’ll find a car park located at the end of the road. This is an easy entry point to visit the Eric Singleton Bird Park. There's a convenient look out for bird spotting only a few metres from the car park.

Some of the birds that can be viewed in this area include honeyeaters, hawks, ducks, and pelicans. One time whilst visiting the Bird Park with a friend I excitedly pointed to what at the time I thought looked like a great white bird, which in fact turned out be a huge white container of sorts - how embarrassing! As well as spotting actual birds, you’ll often hear the rhythmic croaks of the resident frogs as you walk along the path to the right of the Bird Park. 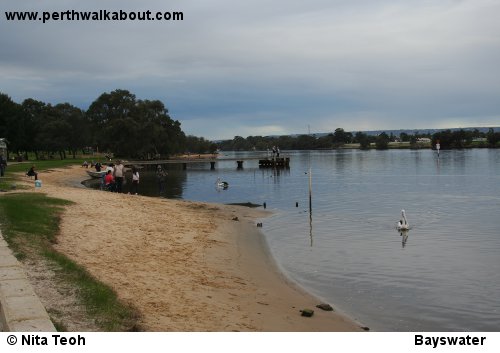 Cycling around Bayswater and Beyond

If you’re a cyclist, you’ll be spoilt for choice  with the  cycle paths that hug the Bayswater foreshore on the way to historic Guildford, Ashfield Flats and Bassendean. Wander down to the eastern most side of the Riverside Gardens, where boats get ready to launch off into the water, and you’ll see a path to the left, which is part of the Perth Bicycle Network. You’ll see signs that take you along the cycle path in the direction of Guildford.

Heading towards the city beyond Garratt Road bridge, you can cycle on the bicycle network from Bayswater through to Maylands and then on to Claisebrook and East Perth, all without a hitch.

If you have a dog, then take your favourite pooch to the Dog Beach in Bayswater for a treat. To find it easily, keep an eye out for the gazebo lookout that faces the Ascot racecourse. Most evenings of the week, you’ll find a casual get together of the dog walking community clustered around the dog beach. Dog owners catch up on the week’s news and happenings, whilst their dogs enjoy umpteen  moments of friendly madness playing chasy, having a swim and rolling in the grass.

Once a year, the Avon Descent - a thrilling white water marathon race - arrives at Bayswater. If you would like to catch the action, the Avon Descent is held in October of each year, and the Bayswater Reserve is the finishing point.

On the weekends, you’ll find a lot of families picnicking and enjoying the beautiful water surrounds of the Bayswater foreshore near the Garratt Road Bridge. It’s a good location for spotting pelicans and enjoying the sunset, with plentiful picnic and BBQ facilities. You’ll often see a kayaker or two as well cruising along the Swan River. It’s also a good spot to view the Perth city skyline.

Bayswater is the home for several rowing clubs, including the Bayswater Paddlesports Club and ANA Rowing. It’s often a hive of activity on the weekends, as rowers congregate to prepare and train for their races.

If your kids need to burn up some excess energy, take them to the Children’s Playground within the Bayswater Riverside Gardens. It’s just to the right of the Dog Beach. The children’s playground is modern and boasts many swings, slides, and whizzy dizzies to keep the kids amused. 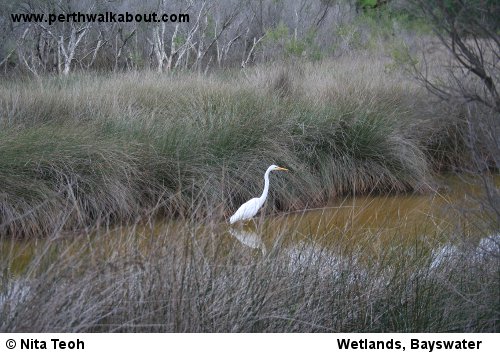 Take a walk under the Garratt Road Bridge, and you’ll wind up on a path that take you through to the Baigup Wetlands. Once you reach the top of the hill, you’ll get a scenic bird’s eye view of the Maylands foreshore area, and along the way you’ll be sure to spot some bird life in the picturesque wetlands. It’s a popular spot for photographers wanting to snap a photo or two of the resident birdlife. Mind the mosquitoes as they get a bit too friendly as it gets dark.

When you get to the top of the hill, you can take a left along Swan View Terrace, and after a bit less than a kilometre, you’ll find a connecting path to take you to historical Tranby House.

Bayswater foreshore is a great place for an outing on the weekend, or any time for a bit of R&R. Enjoy the lovely outdoors in Bayswater and be sure to check out a new recreational spot or two.