Crocs in Kimberley - See You In A While Crocodile!

Of all the dangerous animals that exist in Western Australia (WA), the crocodile has to be one of the most feared yet revered on the list.

Maybe it’s the fact that the crocodile dates back 240 million years and has outlived dinosaurs, or simply because it is so big and scary and has absolutely no fear of humans, but whatever the reason, people love to look at them.

Visitors to Perth can see them at the zoo but for those planning on travelling further north, there are crocodile farms in Broome and Wyndham. The Kimberley region in the far north of the state also offers the opportunity to see the crocodile in its natural environment, if you are game! 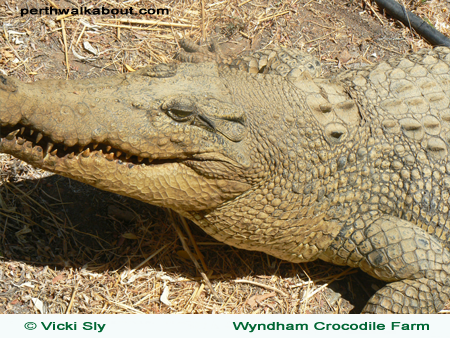 We have two types of crocodiles in WA. The freshwater crocodile or ‘freshie’ is found in the freshwater regions of the Kimberley around rivers, lakes and creeks. The freshies have a narrow snout and a straight jaw and usually grow no more than two to three metres.

They tend to eat small insects, lizards, frogs etc and are considered relatively harmless. Still, I’m sure that’s in comparison to their cousins the saltwater crocodiles. And let’s face it, I’m wouldn’t be prepared to hang around and find out what type of crocodile was swimming towards me.

The ‘salties’ are prehistoric looking and are to be given a wide berth and plenty of respect. Although they are found in the ocean and saltwater estuaries, they also move hundreds of kilometres inland.

They can grow more than six metres in length but it is the sheer width of their girth and the power of their jaws that tends to blow people away. They are mean and territorial so travellers to the Kimberley are asked to get ‘crocodile wise’ and learn their habits before they learn yours.

The best place to get up close and personal with the prehistoric reptile is definitely a crocodile farm where you can stay safe behind a very large fence.

That is exactly what we did when we travelled to Wyndham which is one of WA’s oldest towns that sits on the Cambridge Gulf and is surrounded by mudflats. This is crocodile country where swimming is not high on the tourist ‘to do’ list.

The town is located 101 km from Kununurra and only 48 km from the junction of the Gibb River Road and the Great Northern Highway – a short distance when you consider the Kimberley region is three times the size of England.

The farm has a host of ‘farmed’ reptiles as the Australian salties are highly sought after by Europe’s haute couture to be used in the making of shoes and bags. 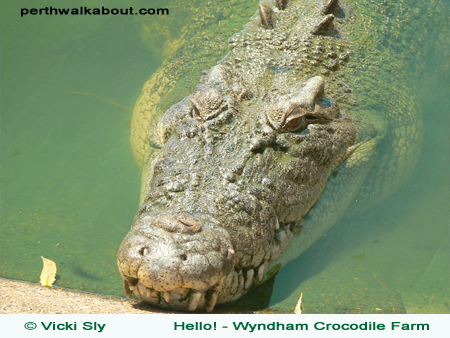 Apart from the farmed crocodiles, the Wyndham Crocodile Farm is also home to many rogues that have been captured in northern Australia and relocated for the safety of the community.

One such rogue is Oombi, named after the town of Oombulgurri which is about 45 km away. He was removed from the community after killing more than 20 dogs and threatening the safety of people in the town.

If you are planning a trip to Broome which is 2200 km north of Perth, the Malcolm Douglas Broome Crocodile Park in the heart of Cable Beach is another place to view the Kimberley crocs.

It is also not uncommon to have the beach closed for the day if a crocodile has been spotted swimming past. The warning signs definitely make for a good photo opportunity and I am sure the tourists must think which would be worse, the sharks or the crocodiles?

Having seen crocodiles in the natural environment in the far north, I must admit this is one of the most heart-thumping experiences possible.

Have you had a close encounter that you wish to share?