Travel Essay: Seagulls and Cruise Liners at the Geraldton Marina

Geraldton has undergone dramatic change over the past decade. The once sleepy agricultural town 420 kilometres north of Perth is now a thriving city at the centre of the Midwest mining boom.

Since rerouting the train line from the beachfront, the cityscape has been revitalised. The once industrial landscape now has a fantastic children’s playground and waterpark as well as wide grassed areas with shaded tables dotting the foreshore.

A five minute stroll North past the Dome café along a winding seaside path, is the new marina. During the summer it is a popular stop off for cruise ships on their way up and down the coast. 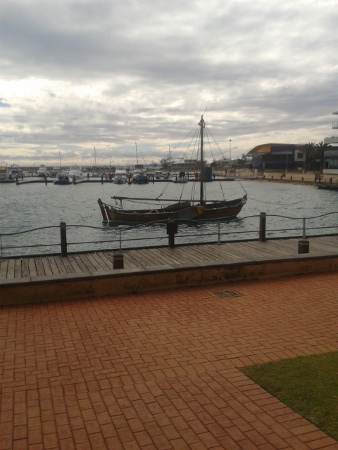 A moist silver sheen tints the vast expanse of glass at my back. Beyond the glass, people move in silence between relics of the distant past and oddities from the deep. They are all passengers from the enormous cruise liner that has moored just offshore, during the night.

Underneath me, shaped Jarrah planks have been laid below the museum’s large architectural awning. A nice enough space to sit for a while. Thirty metres further down a young family huddles at a hurriedly improvised picnic. I wonder what they think I’m doing.

It’s completely overcast with slate grey cloud threatening rain within the hour, and misty wind whipped cloud delivering a stinging drizzle. Palms and salt stunted pines flail in the gusty breeze while aerobatic swallows swoop back and forth into the lee of the buildings eaves.

This is the centre of the marina on a weekend. New buildings cluster the waterfront. It seems like a fantasy concoction of startling white Mediterranean apartments and bright, blocky, commercial premises. Millions have been spent here but I don’t see any locals making use of it. It seems sterile or like it’s waiting for something. Maybe it’s just the weather.

Past the motor launches and yachts secured in their rubber lined pens, a lone fisherman stands at the end of the breakwater. Swinging his rod in a wide arc over his shoulder he casts out into the deeper water. You have to be keen to be out there on a day like today.

Wind howls through the trees and past my ears bringing with it the strains of an Irish band playing Black Velvet Band with mournful cries from seagulls as counterpoint. The music comes from the gaily coloured reception tent erected at the disembarkation point for passengers being ferried to shore.

The tenders are actually the ships lifeboats and they flit back and forth across the grey, green water between shore and the vast liner which sits in the bay like a marble skyscraper that has tumbled on its side. The boats move through racing squalls that darken the water and throw up a fine glistening spray.

On arrival the tourists stumble about, getting their land legs again and stare out with a bewildered look at the sleepy town fading in and out of the mist before them. There are no shops here so a slow pilgrimage begins of Australian and British retirees walking between the museum, town and the supermarket. It’s a conga line of brand new sneakers and aging bodies.

The clouds now really roll in. Great fat drops of rain fall before settling in to a more continuous and sensible sized downpour. The five grain ships on the horizon disappear in a bank of dark fog and the passenger liner much closer in takes on a ghostly form, like some modern Mary Celeste.

The gulls settle on the water and a couple walk towards me in sunhats, shorts and polo shirts. I suppress a laugh as they draw near and enquire of me the location of the museum. As nicely as possible I explain that they are looking at it.

I’m now surrounded by people, it’s taken them a while to walk around the boardwalk from the boats. Many of them are on phones, talking to faraway friends and telling them how wet the weather here is. This is the first rain I’ve seen in months but there’s little to be gained from telling them that.

They continue on past me between the giant, heavily corroded ships propeller mounted on a plinth in a small lane and a row of bicycles chained in racks and rapidly rusting to pieces. A plaque stands in front of the propeller as if to explain why it’s there but on closer inspection proves to be blank. Perhaps it was written in Braille? I didn’t check.

Floating directly in front of me is a replica of the 16th century Batavia’s longboat. Heavy ropes anchor the boat to shore both fore and aft. She drifts listlessly as her algae festooned lines droop in the water and are closely attended by schools of small fish that both hide in the swirling fronds and feed on the tiny plankton also gathered there.

Through the narrow channel a sleek blue hulled yacht slips into the small harbor. A well practiced and efficient deckhand furls the jib sail around the forestay while the helmsman skilfully guides the vessel amongst the crowded boats. Within minutes they are safely docked and making their way toward a waiting car in the car park.

More people are arriving to fish now; they are a totally different crowd to the elderly cruisers. Fishing seems to require a mandatory flannelette shirt and a six pack of beer. I see no evidence of fishing prowess but they are so loud, I can’t imagine that any fish stay nearby.

A colour coordinated couple stands behind two local kids that have turned up with their parents and promptly taken off in their own direction. They are trying to tempt tiny puffer fish with old prawn shells into range of their treble hooks. When one comes into range they jag their hooks sharply through the water, with no success.

Further to the left sits a forlorn looking playground covered by a sodden blue shade sail. The playground has been cunningly shaped into the form of a ships bridge. On a fine day it would be a magnet for children but today sits as lonely as the slowly blinking marker buoys lining the town’s main channel.

Out of the gloom a large grey research ship heaves past the breakwater. Her decks are studded with numerous cranes and dominated by a large orange helipad. A small submersible sits on the aft deck looking like a large yellow and black life raft.  Maybe they have been out studying the wreck of the Sydney. Wash from the vessel forces a fisherman higher onto the rocks in a hurry.

The weather finally wins its battle of wills with me and I get up and start down across the roman inspired, patterned paving to the board walk leading back to my car. A sculpted steel rail snakes along the way and stops people from easily falling into the clear shallow water below. 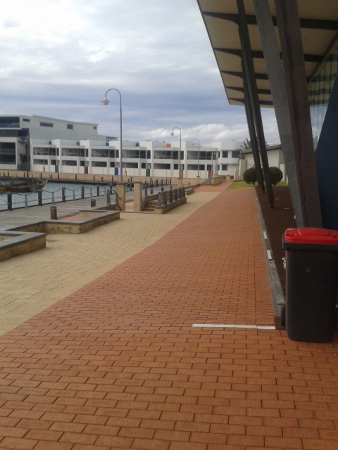 Looking over the rail, groups of small trevally and black and white striped angel fish dart into the rocks as my shadow passes over them. A jogger runs past dripping with rain and sweat, oblivious to the watery dance below. He looks like a heart attack is imminent but he’s probably fine.

As my car comes into view I ponder how the first time I came to this town if I’d tried to park here, I’d have been several hundred metres offshore and deep underwater. I’m glad I waited till now to try it.

As I begin the drive home I see the lines of passengers walking back and forth like large brightly coloured ants. Empty handed ones going towards the supermarket and heavily laden ones on their way back.

I wish them all well on their long ocean voyage to their next destination in Fremantle. At least a day’s sail away. I hope their supplies last that long.

Geraldton has daily flights from Perth or is a pleasant four and a half hour drive up the scenic Indian Ocean Drive.

Steven White is a journalism student studying at Charles Sturt University, doing long distance education with the assistance of the Geraldton Universities Centre.