Walking with the Gormley Statues on Lake Ballard

The legendary artist, sculptor, and modern designer has struck again. Anthony Gormley has caused another stir, but this time in Western Australia. His eerie mark on the salt flats of Lake Ballard not far from the Western Australian town of Menzies attracts thousands of contemporary art lovers every year and is sure to continue to do so into the future.

The 51 life sized black steel statues are spread across Lake Ballard salt lake and were an initiative of the Perth International Arts Festival in 2005 to celebrate the the 50th anniversary of the Arts Festival. Visitors to the site can take in the smells and eerie quietness of the Ballard goldfield, and drive along the Golden Quest Discovery Trail to the historic ghost towns and tourist sites of Kalgoorlie. 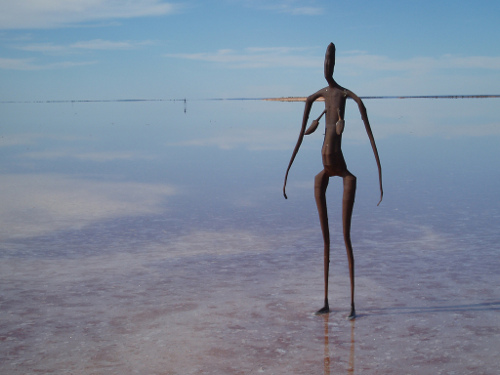 What exactly are Gormley’s Statues? When Gormley came up with the idea of creating a spectacular masterpiece in the salt fields, he asked 131 of the locals from the nearby town of Menzies to scan their naked bodies in casual poses. These naked body scans were then used as the basis for the attitudes and emotions of these spectacular statues.

All elements of Western Australia shine through in these statues, the special steel alloy metal originates from the local area, the bodies are the exact height of the local people, and they stand out from the intense golden sands of the Lake Ballard salt flats.

Gormley said that from the very first minute he arrived in Menzies and saw Lake Ballard in the distance, he knew that his creations would have to match or better the natural geology and would have to be just as awe inspiring as the lake itself. The human equivalent could not be portrayed in any other way than by using actual humans as the basis of the artwork. 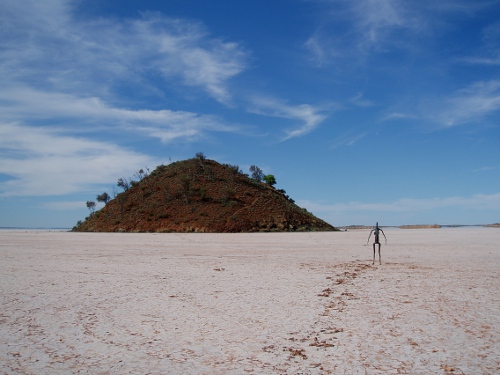 The closest town of Menzies was once a mining town with a population of over 5,000 people, with many hotels and breweries, and a fully functional hospital, but this has since declined and the town has basically turned into a small village which is only kept running through the mass influx of tourists who want to visit the Gormley statues and the Aboriginal art including work by the Ilkurlka and the Tjuntjuntjara people.

One mystery that surrounds nearby Menzies is about the Town Hall. For well over 100 years the Town Hall stood with a blank clock face. In 1905, rumours have it that the ship carrying the clock face from England where it was made sank en route because of a sea monster around the Hong Kong area trying to warn sailors away from rough seas around the Western Australia coast, obviously this is just a rumour, but the Town Hall clock face stood blank until the year 2000 when a replacement face was shipped over at a cost of millions.

The best time of day to visit Lake Ballard and the Gormley statues is either very early morning or late afternoon, when the wave of heat rests upon the salt lakes and a picturesque steam bath surrounds the area.

It really is worth paying a visit to Lake Ballard, the closest thing available to these statues is the ‘Another Place’ artwork in Crosby, Liverpool, by the one and only Anthony Gormley in his home country, the United Kingdom.

Joe Worthington is an avid traveller having explored Perth numerous times, and a multi-published travel writer. He has been published in literally hundreds of travel publications and is always on the lookout for new work to do! He can be contacted at This email address is being protected from spambots. You need JavaScript enabled to view it..

For other Related Articles about travelling in WA, please scroll to the bottom of this page.