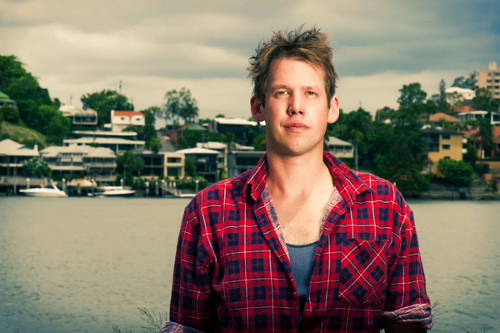 These questions and more are what comedian Xavier Toby will be addressing in his stand up show White Trash. He performed White Trash at the Melbourne Fringe 2012 and now he’s in town to share his funny and thought provoking show at the Perth Fringe Festival 2013.

You’ll be sure to get plenty of laughs at his comedy act, but along with the humour Xavier sneaks in some seriously thought provoking  points about racism in Australia which may hit a nerve or two.

And if comedy and racism weren't enough, Xavier also promises to include penguins. We aren't quite sure how these cute little birds fit into the grand scheme of things, so if you want to find out, you'll just have to come watch Xavier Toby at the Fringe Festival in Perth.

Finding myself intrigued by the idea of a comedic look at racism in Australia (and a bit puzzled about the penguins!), I went in search of some answers from Xavier Toby himself  about his views on racism in Australia and about other issues that we face as a society.  And as you might expect, Xavier replied with a mix of insight, wit and wisdom, with just a touch of wacky thrown in for good measure!

Q1: What was your inspiration for your show White Trash?

I think a lot of people have forgotten what racism actually is. I’ve got friends who are casually racist all the time, and they think that’s fine. Then I’ve got other friends who are so politically correct that they think any mention of race is a form of racism. It’s not.

The people I know who express racist ideas, most of the time they’re not being mean on purpose, I just don’t think they understand the damage their words and attitudes can cause. They also don’t think it’s possible to be both neat and casual at the same time, and I kind of agree with them on that one.

So I want to restart the conversation around racism. By talking about it and thinking about it, drawing some lines and working out what’s racist and what’s not, hopefully people are better equipped to deal with it.

Racism I reckon works exactly in the opposite way as the Kardashians. If you ignored them, they would go away, but ignoring racism only leads to it spreading like a putrid, maggot infested, well past it’s used by date Vegemite. Which like racism, is really difficult to spread on toast.

Q2: Where did you grow up and what impact did it have in forming your views about racism in Australia?

I grew up in Melbourne, in a really safe, predominately white, friendly and lovely suburb. It was very rare to encounter any sort of racism, because as children, we knew it was the wrong thing to do and were too busy playing footy. It’s only when I revisit that suburb as an adult, do I hear all the casual racism, and only about people who aren’t there, never to anybody’s face.

If I’ve had enough to drink, I might even be brave enough to point this out, and I’m often told, ‘Settle down comedy boy, it’s only a little bit racist.’

But I don’t think it’s possibly to be a little bit racist. It is possible to have a little bit of cake, however through all my research and thinking about racism, I can say for certain that racism is definitely not cake.

Q3: What messages are you hoping to convey to the audience of White Trash in your upcoming performances at the Fringe Festival in Perth?

That laughter is NOT the best medicine. If you’re sick, you need real medicine, not some smart arse trying to crack jokes. When I’m unwell, I find very few things funny. So if you’re not feeling well, stay at home and pick another night to come to the show. I don’t want to catch what you’ve got. I don’t want to have to cancel a show.

The main message of the show is that all racism is baseless, every difference between any human on this planet truly is only skin deep, and penguins are awesome. Now that you know that, you’ve got no need to buy a ticket. Unless you want to find out why all racism is baseless, why penguins are awesome, and why I have nightmares about the West Coast Eagles.

Q4: With access to the Internet and an abundance of information in this digital age, wouldn’t you think that our society should be getting smarter?

I’ve read that you believe our society is getting dumber.

Why do you think is the case?

If you search for something on Google, it doesn’t return the right answer, just the most popular answer. So instead of getting our information from the most intelligent people on the planet, now it’s just what most people think, and most people watch reality television, and care about the relationship status of Jennifer Anniston. If I had a chance, I’m not saying I wouldn’t have a crack, I just think we should be listening to experts.

Web pages don’t disappear, even if they’ve been disproven. When the information in books is superseded, they’re replaced. For example, the link between vaccinations and autism has been disproven, as well as the dangers of fluoride, and climate change is a fact, but the web pages saying otherwise are all still there, getting plenty of hits and that debate continues. Instead of moving forward as a society, we’re stuck having the same arguments.

Society is getting dumber because we’re losing the ability to think deeply about things. You don’t read anything on a smartphone, or computer screen, you can’t because there’s so many bright flashing things competing for your attention. And those penis enlargement things are all lies. I know because a ‘friend’ told me so.

With a book, you ponder, digest and reflect on the words and ideas, and through this process develop an ability to think deeply. This is disappearing. We’re becoming self-obsessed dullards.

And what can we do to get smarter about issues such as racism in Australia?

Talk about it. If you hear someone say something racist, just point it out. Don’t attack them, politely point out that what they’re saying is factually incorrect. Is it really? How do I know that? Well I explain it during the show, or you could just look it up on Wikipedia. Then for the right answer, use a book.

Q5: Do you think we should we change the emblem of the Australian flag and if so, why?

Yes, because it’s mostly British, but we’re not in Britain. We’re in Australia.

We’ve got an economy that works, beaches worth visiting, and our teeth aren’t rotting, and we talk about things other than the weather. Also, red, white and blue aren’t very Australian colours. Navy blue absorbs heat, just not practical for our country. We need a flag that’s Australian. I still like that green and gold boxing Kangaroo one. Imagine that at the UN? With all those European three colour boring flags and we’ve got a boxing Kangaroo? Awesome.

Q6: What other performances of yours in 2013 can we look forward to letting our readers at Perth Walkabout know about?

I’ll be at the Adelaide Fringe in late Feb, and the Melbourne Comedy Festival in March, but that would cost people the airfare from Perth plus the ticket price. Better to save on the airfare and come see me in Perth. If you do that, you’re saving yourself at least $400 just by seeing my show. What other show gives you $400 worth of value? 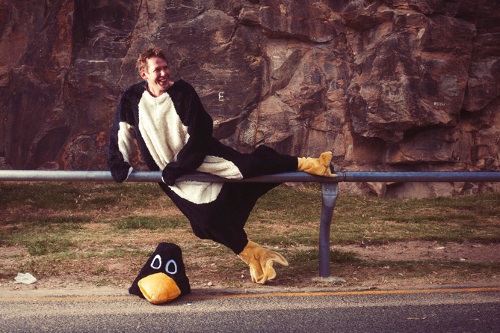 Q7: Can you reveal anything about “the penguin” in White Trash??!!

Penguins are the perfect for talking about racism because they’re black and white, sometimes with a little bit of yellow. Pandas would also be a good because they’re black, white and Asian. However Pandas only speak Mandarin because they’re racist, and they have been known to beat up children, which is mean. There is not one recorded incident of a penguin ever being racist or beating up a child.

White Trash had sell out performances at the previous Adelaide Fringe and Melbourne International Comedy Festivals, so you can be sure that tickets for Xavier Toby's Perth run will be going fast! If you like something a little more challenging than your average comedy (or if you are a sucker for penguins), then Xavier Toby's White Trash is just the thing for you.

If you enjoyed this interview with Xavier Toby, please share it!