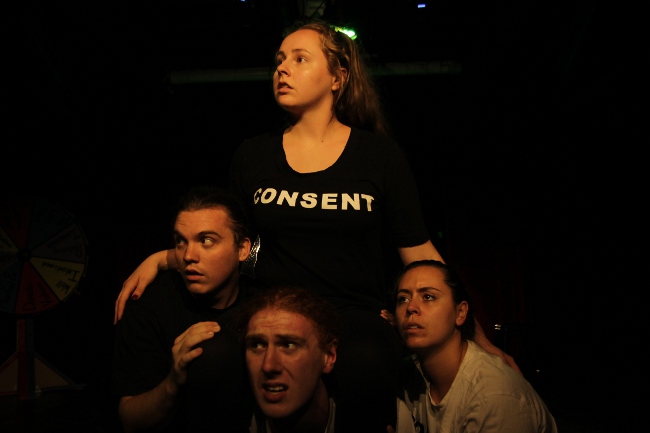 For the second night in a row, I headed to the Actors’ Hub. This time, it was for Implied Consent, another of the four shows that forms part of their 4x4x4 program for this year’s Fringe World. As I walked in, there were print-outs of news articles concerning rape, sexual assault, and the question of consent. Various activities had also been set up in the foyer; for example, attendees could write their stories of implied consent, then either shred them or hang them on a makeshift washing line for others to see.

As the name suggests, Implied Consent examines the grey area of implicitly-granted consent through four actors who, at various times, portray a series of nameless characters of varying genders, ages, and backgrounds. Over the course of the evening, these characters share their thoughts and tell their confronting stories, compelling the audience to think about the questions raised. Have people implied their consent to something by working in certain professions; or getting intoxicated; or consenting in the past; or simply not saying “no”? Why does the issue of consent cause so much confusion, and why is anything less than enthusiastic consent acceptable or desirable?

The play’s sobering themes are framed by a comical game show format, setting up opportunities for moments of dark humour. There is also some audience participation involved, including a game of “Rape Apologist Bingo”. While there are minimal props, the show gets quite physical at times, with the actors grabbing, pushing, and climbing on each other to illustrate their words.

Implied Consent is a topical, thought-provoking production in a world that still believes victims are asking for it at least some of the time.

Though advertised as 60 minutes, this particular show ran for about an hour and a half (including an intermission) after starting 15 minutes late. This didn’t really bother me personally, but it may be an issue if you have multiple commitments on the night.

Implied Consent is on again at the Actors’ Hub in East Perth on February 10 and 14 as part of Fringe World.