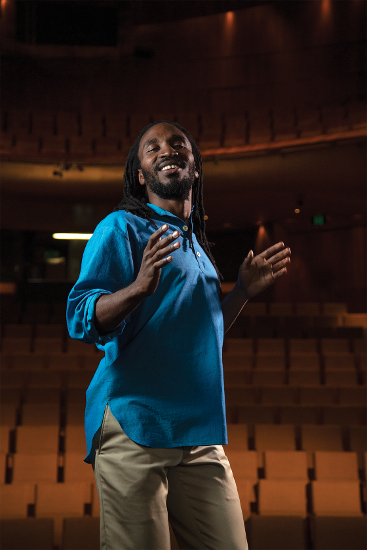 In a world premiere season, Co-Directors Emily McLean and Joe Paradise Lui have risen to the challenges of covid-19 in order to tell the story of some unique and every day West Australians who have achieved extraordinary things. "Unsung Heroes" is Black Swan State Theatre Company's first outing in its series of "Black Swan Home Theatre".

Emily and Joe have been encouraged to grow and adapt to working during covid times by transforming a series of staged monologues into a series filmed on stage, that will be live streamed during the next fortnight from tomorrow Tuesday 21 July onwards.

" Working closely with Joe Paradise Lui to ensure a shared language across the project that still has room for each individual story's quirks and demands has been a rare treat.

It has been freeing to have the ability to cut and zoom to a close up - like really, really close up.

Building a relationship with the audience member found down the barrel of the camera has been an interesting use of the form and the best (and only) possible path to our audience.

And in fact it isn't one audience member down there - we have put the whole Studio Underground audience onto one seat and we are telling the story to that seat."

The performances tell stories of courage, life’s music, adventure, new beginnings and dignity and is a timely reminder of our shared humanity and of our uniquely Western Australian identity.

The program line up is as follows:

A renowned musician follows his passion for song to a country far from the land of his birth.

Carmela Caterina Tassone is a woman that places aren’t named after. Her name has never made newspaper headlines. You will never have heard of her. This is the story of her nondescript existence.

Playwright Chris Isaacs tells the story of one Italian immigrant woman, his grandmother, who survived many hardships and after WWII, brought her strength of character, commitment to hard work and love of family to this country.

From the stages of Subiaco to international acclaim, Effie Fellows wowed audiences around the world with her male impersonation act.

She was known as A Merry Masquerader, EFFIE the Nifty Entertainer, the Merry Madcap!, the Laughter specialist, the Whistler dancer, singer, and humourist. Along her adventurous way she married a clown and had a long affair with a boxer.

A courageous doctor risks all to shine a light on the right to choose to die with dignity.

This is the true story of Alida Lancee, the Perth doctor who came to the public’s attention after admitting that, when a terminal and suffering patient had requested assistance to die (after palliative treatments failed to help), she had eventually agreed to help. Her actions galvanised the public debate on assisted dying in WA.

She's strong. She's smart. She has a wicked sense of humour. Her story of survival has changed domestic violence laws across Australia.

Own Way is a true and honest story about Georgia Prideaux-Cera, who managed to get WA’s first ever lifetime restraining order against her abusive partner. It’s a harrowing story of survival against the violence of her attacks - which were spread over years, the worst of which happened after Georgia had left him.

Each Unsung Heroes monologue was filmed on stage. The pre-recorded performances will be live streamed for free to registered users from Tuesday 21st July.

All performances will also be made available on demand.

To watch the performances live streamed or on demand, registrations are essential.

To find out about the hottest events from Perth, follow us at @PerthWalkabout