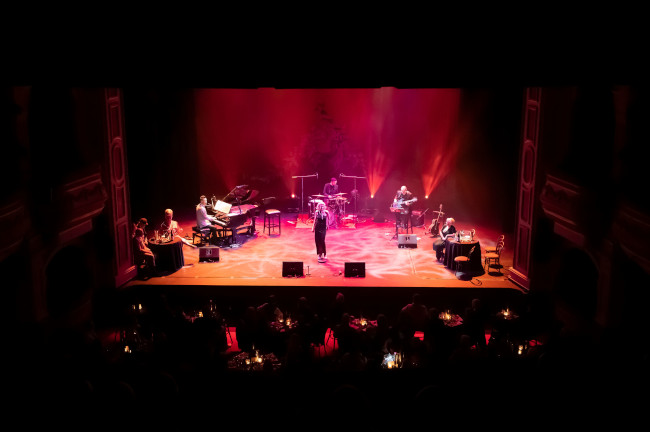 After taking in a couple of shows at the Inaugural Perth International Cabaret Festival (Carlotta's The Party's Over and Dean Misdale's Life's a Drag, both terrific), my partner and I were looking forward to sampling a smattering of the performers on offer at the Closing Night Gala.

Hastily thrown together by Artistic Director Michael Griffiths when Covid-19 struck yet again and prevented Meow Meow and Lior from coming over to Perth, the Closing Night Gala featured an extraordinary lineup of local and interstate talent, and proved to be a fitting finale to a successful first foray for the festival.

Michael Griffiths and band kicked off proceedings and got things jumping, and he was quickly joined onstage by co-host Amelia Ryan, who was later to wow (and terrify) the crowd by coming down and selecting a male audience member to assist on-stage. I've never seen so many guys look so terrified! The gentleman selected really rose to the occasion though, and was a great sport about it.

With the whole night being an group effort, Michael quickly passed the baton over to Dean Misdale, who belted out a couple of new numbers for the crowd. We had seen him the night before and once again his stage presence and amazing voice did not disappoint.

We then moved over to Rick Steele, who needed an assist to get set up, but certainly didn't need any help in blowing the crowd away with a couple of powerful blues numbers.

After that bit of grit, it was time to get back to the sexy sequins , with such performers as Carlotta, Louise Anton, John O' Hara, and Libby O'Donovan all coming on stage to do their thing. While all were amazing, I must pick Libby's interpretation of “At Last” from a Broken Hill perspective as my own highlight of the night, and it had her fellow performers in stitches!

We finished with a “powerful” performance from Steven Oliver, and despite a couple of minor microphone malfunctions (the show had gone on so long the batteries were running out!), the performers still had the energy to all get together and sing along for the final number.

Michael Griffiths closed the show by thanking everyone and inviting the party people to come on down and join in for the Uplate Downstairs  event which was kicking off later that night. Judging from the crowd in the foyer, it looked like a whole lot of the large audience were planning to kick on downstairs.

All in all, just on two hours of the best of Australia's cabaret performers to watch and enjoy. Considering it was a last minute replacement for the missing Meow Meow and Lior, an incredible achievement by all.