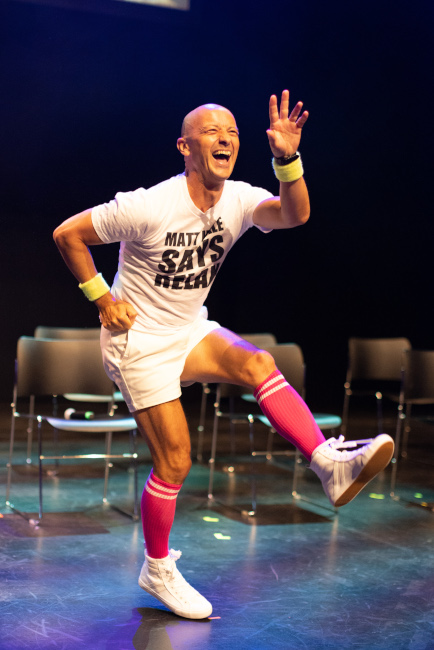 And yes, I know Jerry Maguire is a 90s movie… but it does star Tom Cruise, who was of course in Top Gun, which is spoofed in Top Fun: 80s Hypnosis Spectacular.

I’ve known about Matt Hale the comedy hypnotist for a long time through social media. For some reason I’d never gone to one of his shows. But I also have an inexplicable love of the 80s despite not actually living through it, so when I saw that Matt was doing an 80s-themed show, I figure it was finally time.

Shows that require audience participation – like this one – can be fraught with danger. Or at the very least, awkward and uncomfortable. But Matt was engaging and effortlessly funny, coaxing out the best in the volunteers on stage. We cheered on his co-stars for the night as they marched to The Proclaimers, jumped to Toni Basil, and mooed like cows to Joan Jett and the Blackhearts.

Besides, it’s almost impossible not to feel happy when the most karaoke-worthy hits of the 80s are pumping all around you.

Hypnotist Matt Hale: Top Fun! 80's Spectacular is on at Studio Underground in the State Theatre Centre of WA as part of Fringe World 2023 "State of Play" until 5th February.

You can also catch the show in the Beer Garden at The Court and Park View Hall at Scarborough Sports & Community Club in February.