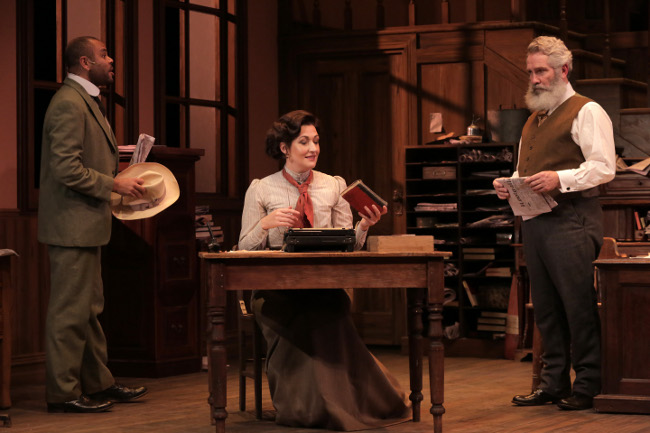 Imagine a time in the late 1890’s where a newspaper in a town called Koolgalla (think of a town somewhat like Kalgoorlie) has hired a new editor “J.G. Milford”.

She also happens to be a woman!

And so in The Torrents - Black Swan State Theatre Company’s latest co-production with the Sydney Theatre Company, the mayhem and madness begins as the staff have to cope with the introduction of the gentler sex into their traditionally masculine workplace.

On stage, in the midst of the Heath Ledger Theatre at the State Theatre Centre of WA, the set takes on a distinctive look with stacks of old newspapers piled high in the newsroom, surrounded by its period style furniture and adornments. You can almost smell the ink from the printing press. It is another triumph from the creatives at Black Swan State Theatre Company.

The action begins as we are introduced to the key characters:

Mr Rufus Torrent – “The Boss” – the experienced newsman at the helm.

John Manson – “the Investor” - the newspaper's controlling investor – and as they say the guy who pays the piper calls the tune.

Ben Torrent – “The boss’s son” – a philandering playboy more often to be found at the local pub The Royal than working. Engaged to his pretty looking fiancée Gwynne (a traditional 1890's young lady) and stuck in the shadows of his successful father.

J G Milford - "Jenny" – the hired editor settling in to her new job, and not afraid to speak her mind and determined to make it as an independent woman.
Kingsley – with his passionate, big dreams about piping water to Koolgalla to keep the town alive once the gold runs out.

And the staffers in the print room – the fresh faced cadet (Bernie), the punctilious Scot (Jock McDonald) and the garrulous old timer (Christy).

The humour is sharp, and as the town gets their head around Kingsley’s idea (think C Y O’Connor and his grandiose dream of piping water to the Goldfields) the newsroom is turned on its ear as we watch the interplay of characters, each with their own agendas.

Hats off to J G Milford – she said it all and gave it back to the men with substance and class during the evening’s sharp banterings.

In 1954, the Playwright Advisory Board awarded The Torrents the prize for “Best Australian play” along with Lawler’s Summer of the Seventeenth Doll (another classic that was performed by Black Swan State Theatre Company last year).

Not surprising, as multi award playwright Oriel Gray (1920 – 2003) was truly ahead of her times in many ways. The Torrents, with its themes of equality and gender roles, mining vs environmentalism, and investors influencing the media, might easily have been written as a critique of modern times under the cover of a Victorian era setting.

We are lucky to have The Torrents currently premiering in Perth – an immensely pleasurable evening of intelligent and witty entertainment live on stage at the Heath Ledger Theatre.

The Torrents is on until the 30th June.