The Perth Walkabout Monthly Wrap is published at the start of each month to provide a snapshot of articles that hit the headlines in the last 4 weeks.

Here is Perth Walkabout's Monthly Wrap for the month of June:

Review – Still Mine at Cinema Paradiso and Windsor

Still Mine now showing at Cinema Paradiso, Northbridge and Windsor, Nedlands is a poignant movie about an elderly couple in their eighties and the challenges that they are faced with living on their farm in New Brunswick.

Zeitgeist by Just Improvise – Improv Theatre with a Cabaret Twist

Zeitgeist performances have now finished. Stay tuned for the next exciting performance by Just Improvise. 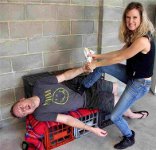 It's a must see cult classic that explores the madness of sharing house with the good, the bad and the ugly.
Written by John Birmingham and adapted by Simon Bedak, Steve Le  Marquand and Michael Neaylon, Groovy Boots Theatre is bringing it to life and taking the show back to its pub origins at The Flying Scotsman.

He Died with a Felafel in His Hand is showing at The Flying Scotsman till 29 June.

Day One is a breezy look at the middle class - their jobs, relationships, passions, desires and jealousies - where the audience gets to watch a game of What If? played out in front of our eyes.

Day One, A Hotel, Evening by Black Swan State Theatre Company is showing till 30 June.

Hillarys Boat Harbour and Sorrento Board Walk - Eat, Drink and Be Merry with Sweeping Views of the Marina

Hillarys Boat Harbour, a popular marina and attraction located 23 kilometres north of Perth, where both locals and visitors hang out.

Hillarys is great for shopping, dining, keeping the kids entertained at the playground or beach, or just catching a sea breeze at the marina.

Many of the cafes and restaurants such as Zing Cafe and The Breakwater Tavern have sweeping views of the marina, and make a great place to just chill out and relax with family and friends.

Stay tuned to Perth Walkabout to explore our beautiful city of Perth.